PAUL SOLMAN: And you knew this was coming, right? The new collar candidates are folks like Faine, Burgess, Perez, and, in New York, Ray Rodriguez, who spent 11 years working his way up to assistant store manager at a big drugstore chain.

REINALDO RODRIGUEZ, Former Retail Worker: I used to make $46,000 a year, and then it dropped down to 40.

PAUL SOLMAN: As you got promoted?

REINALDO RODRIGUEZ: Right. It was salary. And then they changed it to hourly.

PAUL SOLMAN: But that wasn't the worst of it.

REINALDO RODRIGUEZ: Oh, my God. When I walked in the bathroom one day, I seen feces everywhere. It's like, how do you get it on the wall? And then there's a couple of times where people passed out in the bathroom.

REINALDO RODRIGUEZ: Shooting up. And we got to call the paramedics.

PAUL SOLMAN: Rodriguez, supporting a family, was desperate to get out of retail.

REINALDO RODRIGUEZ: I used to always picture people with their 9:00-to-5:00 jobs, weekends off. They don't got to work nights. There was times where I would have to work overnights as well. And I was always like, oh, I wish I could have a job like that.

PAUL SOLMAN: Well, why couldn't you get out?

REINALDO RODRIGUEZ: Without a degree it seemed like everywhere else was the same.

PAUL SOLMAN: And then he heard of IBM's electronics lab apprenticeship, applied, got an interview. Were you scared?

REINALDO RODRIGUEZ: Yes, I was scared. This is a dream job. The 9:00 to 5:00 that I have been dreaming about for years and years, this is what I was looking for.

PAUL SOLMAN: So what was it about these folks that got them into IBM?

KELLI JORDAN: Things like a growth mind-set, that willingness to constantly challenge and put themselves out there, take that little bit of a risk and build their skills on a very regular basis.

PAUL SOLMAN: IBM is trading on its long history of training its employees to scale up its apprenticeships, investing $65 million, as well as plenty of federal money, into earn-while-you-learn programs that usually segue into permanent jobs. The company says at least half its U.S. jobs no longer require a bachelor's degree. But, for those without one, even applying can be a challenge. Take Faine's online interview for her apprenticeship. 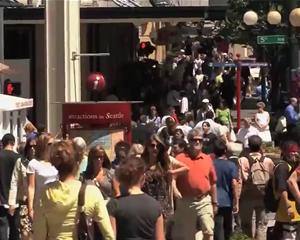 ADQUENA FAINE: So, I had this old laptop that is decrepit and kind of takes an hour to start up, to boot up. When I try to do the Webex, it fails. I'm crying. Like, tears are pouring out of my eyes. This was my shot, and I just blew it.

JENNIFER BURGESS: On my way to the IBM interview, my car actually died on side of the road. And my parents had to come and help me, because it overheated. And then I get to the interview and it dies in the garage. And I have to, in heels and a dress, push it into the parking spot.

PAUL SOLMAN: And all these folks were intimidated by the name IBM.

ADQUENA FAINE: In my mind, IBM is this big computer company, white men, suit and tie, carrying around a briefcase, business-savvy with all of the technical jargon. This is for the B-7000 8.2.

PAUL SOLMAN: But look who's talking technical now. Can anybody learn to do what you do?

ADQUENA FAINE: I think anybody with the drive to can.

JENNIFER BURGESS: It doesn't matter what you are or your background is. It doesn't mean that your brain can't do it. Now go ahead and walk forward.

PAUL SOLMAN: Despite her canine credentials, Jennifer Burgess is now a project manager, or maybe it's because of them.

JENNIFER BURGESS: It's very similar to dog training, because it's about training the humans to be able to do what you need them to do. When they are good, though, you need to give some form of reward.

PAUL SOLMAN: Give folks like this a chance, and there are hidden bonuses for the employer, lower pay than the highest-priced talent, higher loyalty.

MARIANA PEREZ: Because they gave me the opportunity that other people did not.

REINALDO RODRIGUEZ: I'm not going anywhere. Did you not hear where I came from?

PAUL SOLMAN: And with that, a final warning to those of you in corporate America from Byron Auguste.